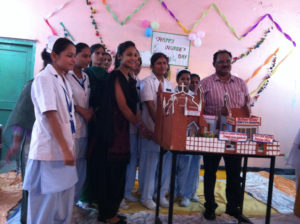 Dr. Alice Ernst began her long medical missionary career (1889-1932) by setting up a dispensary on the orphanage-school compound in Calcutta. Following her first furlough, she returned to India in 1897 to locate a new site for a full-scale hospital program.

Through the encouragement of American Presbyterian missionaries, Dr. and Mrs. J.H. Holcomb, Dr. Ernst chose the city if Jhansi in the United Provinces – One of the areas to be won by the British forces from Indian royalty.

The doctor selected an eight acre plot of land, situated quarter of mile from the chief gate of the walled city. She proceeded to direct the building of two substantial red brick units, a large hospital ward and a dispensary. The hospital was dedicated on march 29, 1900 and named of ward Mary S. Ackerman Hoyt in memory of the donor’s first wife.

Several of the missionaries nurses have served on committees and have taught courses in the graduate school of nursing at Indore, with Miss Matilda Miese, R.N. making the most conspicuous contribution. Under the auspices of the Mid-India Board, a textbook “Pediatric Nursing” was prepared in 1958, written in Hindi for use throughout Indian, and Subsidized by the government to the amount of 10,000 rupees.